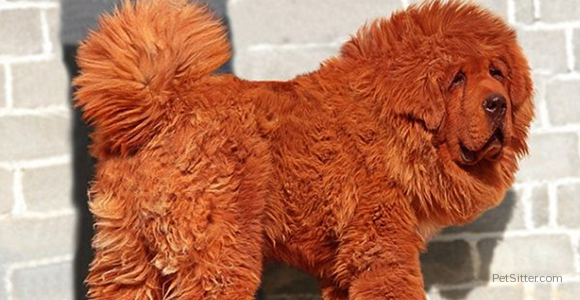 Thinking About Getting A Dog? How About A $1.5 Million Red Tibetan Mastiff?

How much would most of us spend when buying a dog? $500, $1000: a significant amount of money for most of us. Well, not for Chinese millionaires.

A Chinese coal baron has just brought a Red Tibetan Mastiff for a cool $1.5 million, making it the most expensive dog ever sold.

Any ideas as to what his name might be? If you are thinking about Chinese names or traditional ‘doggy’ names you are wrong. His name is Big Splash, which actually seems like the perfect name since he represents a big splash of money. The price tag is not the only thing that is astounding about this dog. He is also an extremely large dog. This breed are known to weigh as much as 286 lb, so no, you will not be able to hold this dog in your arms for more than a few weeks or even lift him for that matter.

When it comes to feeding a dog, most of us would walk into the nearest pet food store and grab a bag of dog food. Not for this dog though. Breeders of this dog recommend a strict organic diet of tripe, boiled fish heads, powdered egg shells, cod liver oil and raw bones to help them clean their teeth. That sounds a little more expensive than a bag of dog food to me.

The high price paid for a Red Tibetan Mastiff is viewed as a status symbol in China in the millionaires’ club. In addition to the dog being red coloured, which is considered a lucky colour in the Chinese culture, this dog is also considered to be a holy animal, blessing their owners with good health and security.

Another reason for an investment this large is the fact that some of the most influential people in the world have also owned Tibetan Mastiffs, including Queen Victoria, King George IV and Genghis Khan. So this dog is pretty much royalty and certainly a status symbol by association.

The Red Tibetan Mastiff is a breed that goes back centuries. In fact , it goes back so far that even Marco Polo writes that he saw one. When he encountered the dog in the 13th century, he described the dog as being ‘as tall as a donkey and as loud as a lion’.

He was, in fact, correct!

Top pet sitters near you